Moms on the Run

Moms on the Run is an instructor-led fitness program with coaching to motivate, educate and encourage you on your journey. You’ll make new friends, find accountability and have fun while working toward a healthier lifestyle.

Our 6-week Polar Season offers programming for walkers to beginning runners to experienced runners. We offer interval training for all levels with a strength training focus built into the class to maximize your fitness level. We also offer weekly steady paced cardio classes designed to help build endurance, with an option to increase mileage.​

Endurance class is an opportunity to build or maintain your mileage into the fall season!

Walker or runner, you will start at your own level and progress throughout the season.

​Not sure if you're ready to register? Join us for a free class!
FREE TRIAL CLASS!

Franchise Owner Alicia joined Moms on the Run in 2018, shortly after her second child turned two. The instant community and accountability was transformational in her journey back to wellness. Alicia is the owner of both St. Paul locations - Como and Highland - and is excited to support this amazing community of women.  Alicia lives in St. Paul with her husband and their two children. She can often be found baking, hiking, running, gardening, or playing outside with her kids. 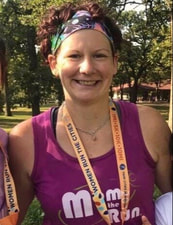 Coach Heather D  has been with Moms on the Run since 2014, coaching since 2018, and she is our Team Admin! Heather keeps things organized and makes it out to as many classes as she can.  She had never considered running before but joined the group after her second child and quickly found herself hooked. You'll often find her running with her dog Derby who is pretty convinced he’s also a member of MOTR. When she's not running, she's most commonly chasing down her two daughters, or trying to figure out what country her husband is currently flying to. She works part-time and also spends as much free time as she can sewing or reading ​(after she gets out for a run).

Coach Carrie W. joined Moms on the Run in 2018. She wanted to find some “me time” and always loved running. She was hesitant about joining because she was worried about not being in good enough shape to run with a group. She had no idea how amazing and encouraging the community would be. She has been able to improve both her speed and distance and is ready to help anyone who feels the same way she did. Carrie works as the laboratory supervisor for the Newborn Screening Program at the Minnesota Department of Health. She spends her free time hiking, playing board games, going to concerts, and keeping up with her daughter. 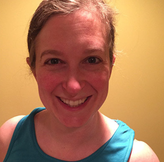 ​Coach Meg is thrilled to be assistant coaching this season! In 2007, Meg ran her first 5K race, but she didn’t start running in earnest until she joined MOTR-Como in 2016. It taught her how to love running alongside others and how to build strength for long runs. Since joining MOTR, Meg ran her first 10K, 10 mile, and ½ marathon races. The TC 10-mile is her favorite race. Meg is proud to be a three-time Summit Series-MNy participant (four races, including the TC-10, annually). When she isn’t running she enjoys yoga and group fitness classes and has been practicing vinyasa yoga for over twelve years. She enjoys entering her baked goods in the Minnesota State Fair and going to the drive-in movies with family and friends. Meg lives with her husband and is a puppy-mom to dog Pepper Potts.

At Moms on the Run we love to run - no matter what the weather! We offer a variety of year-round programming to help you stay in shape and stay connected to our strong community of women

If you would like to learn more about our program or have any additional questions please get in touch with us!